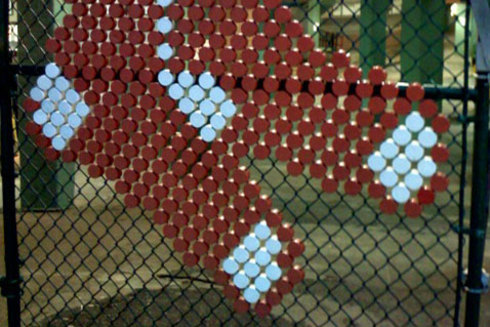 Photo of the Week: I took this photo of Red Sox on the gates of Fenway Park while visiting Boston this weekend for TECH cocktail Boston.

Apple Offers New Gear; Screws Early Adopters
Apple announced some pretty significant price breaks on the still very new iPhone this week, I bought mine in June and was a little miffed by the quick drop in price - that will teach us all to buy an Apple product the day it comes out. However, Apple is offering some iPhone buyers $100 back, so that might stop the negative karma with Apple loyalists a little bit. Apple also announced the new iPod Touch and a new iPod nano among tweaks in the iPod line-up.

Facebook Opens Profiles To Tap Into Google Traffic
Google is getting a bit more like Facebook by enabling a Facebook-style news feed within its Orkut social networking site, while the king of the walled gardens Facebook acknowledges in actions (rather than words) that it really can't go it alone and decided to make Facebook profiles indexable by search engines. With all the people search products (Spock, Gleamd, etc) popping up it will be interesting to see what happens. Facebook could come in and dominate.

10 Future Web Trends
What then can we expect from the next 10 or so years on the Web? Read/Write Web takes a crack at some of the Web trends.

Delicious Preview
A new version of Delicious the social bookmarking product owned by Yahoo was released as a private preview this week. With a more updated design, Yahoo may be positioning Delicious, who has dropped its cleaver dot US URL, as Yahoo's next generation search product.

MyStrands Launches Music Video Discovery Service, MyStrands.tv
MyStrands, provider of a music recommendation service, has launched a slick new website at MyStrands.tv for finding music videos hosted on YouTube. MyStrands leverages collaborative filtering and some pretty sophisticated algorithms to offer music recommendations, so it only makes sense that they put them to use on other areas like videos.

DNAStream = Joost Online
DNAStream is the Spanish answer to Joost. It is a Web based application that allows you to watch video clips and shows streaming from your browser. Orli Yakuel took a look at it and like it.

Geek Marketing
HorsePigCow runs through a list of how to market a product a geek crowd.

Google Reader Adds Search
Google Reader has continued to roll out new features and has now added search to its feed reader product.

Create movies and slideshows with JayCut
This online location gives users the ability to create, edit and publish online movies and slide shows using a set of easy controls. A handful of effect and transitions are also available and music can be uploaded and added to shows.

Photo of the Week: I took this photo of Red Sox on the gates of Fenway Park while visiting Boston this weekend for TECH cocktail Boston.