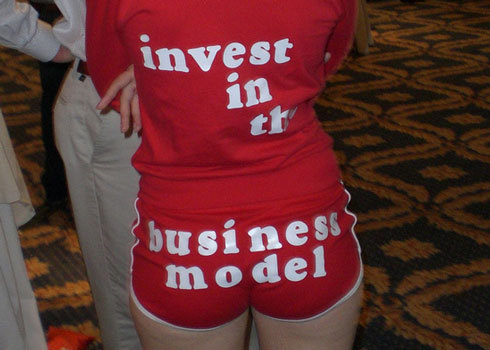 Photo of the Week: I spotted this interesting business model marketing strategy at the TechCrunch40 conference - which was the biggest story this week.

Google Reader Goes Multilingual, Comes Out of Beta
The Google Reader team announced today that the project has left Google Labs and added 9 language options to its existing English interface.

Zink offers inkless printing, raises $25M
The Boston-area company revealed its product, a printer-and-paper combination, at last January’s DEMO conference. The core of the technology is the paper, which is layered with crystals that, when melted at specific temperatures, become colored. Zink recently closed a $25 million round of funding.

Zync: Making Local Search Personal
Zync, a Massachusetts-based startup, operates a local event recommendation engine based around the city of Boston. The site currently lists 30,000 events across 20,000 venues. And even though it only has 355 users, they have amassed almost 9500 ratings.

It’s a Me, Me, Me, Meme World
Brian Caldwell explains the me me meme world. Cool tech geeks start something online. We jump on the bandwagon. Our friends see what’s going on. A crowd forms, asks questions, then follows our lead. Lifestreams form.

Google Wants You To Share Stuff
Google has entered the social bookmarking market with a new product called Shared Stuff.

Digg Getting More Social
Digg launched a slew of new social networking features that will put the site in closer competition with services like Facebook and MySpace.

Photo of the Week: I spotted this interesting business model marketing strategy at the TechCrunch40 conference - which was the biggest story this week.