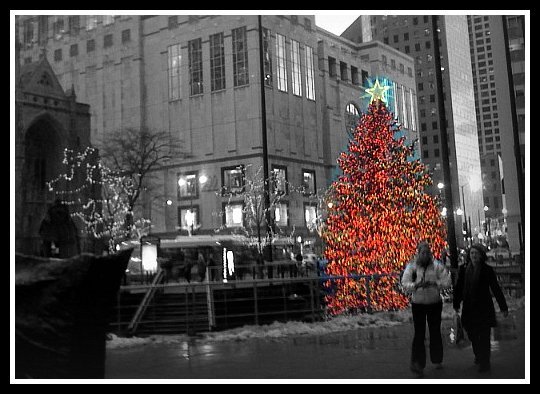 Photo of the Week: I took this photo of the Christmas tree in front of the Hancock Building while working from Chicago, Illinois this past week.

Digg hires bank, hoping to sell for $300 million or more
Social news site Digg is trying to sell itself for at least $300 million so they have hired a bank to help. Would someone please just buy Digg already!?! The fact that everyone is creating Digg-clones should be reason enough for a big media company to jump on Digg before the price gets outrageous.

Will it fly? How to Evaluate a New Product Idea
Evan Williams, founder of Blogger and Twitter, offers up some excellent advice on how to really determine if the idea for your next startup will stack up well on the Web.

Mozilla Expands Its Universe With Weave
Mozilla is expanding its universe today, moving beyond desktop software products like Firefox (browser) and Thunderbird (email) and into cloud territory - web services.

Is Pownce Going To The DeadPool?
Uncov has a very funny post on the demise of Kevin-Rose-founded-Twitter-clone Pownce, noting that their traffic seems to have fallen to the point that “Even TechCrunch can’t save you now.”

Guitar World Launching Free and Legal Tabs
Guitar World is getting ready to launch what will be the “iTunes of guitar tabulatures.” A new site being released today will feature rights-cleared rock guitar tabs and transcripts for users. It will be integrated into Guitar World’s main website.

Fraxi - a “Ning” For Digg Clones
It's only a matter of time till there will be a "Digg-clone" for everything. I just wish someone would buy Digg already and get it over with.

Jiggy: Roll yer own iPhone apps
If you were one of the many that unlocked you Apple iPhone then you might be so luck as to create your own applications to run on it with the help of Jiggy.

Bloglines Gets A Triple Dose Of New Features
Bloglines adds bookmarks, a photo widget and an actual full post view of the original website content appears on.

Live Gamer lands $24M for virtual good trading
A new portal for trading virtual goods called Live Gamer announced its first funding today, promising to add some structure and protections to online transactions. So what I am saying is there is a business built around the business of creating virtual goods.

50 Sports Social Networking Websites
Jason Peck offers a list of fifty websites related to sports. If you are a sports junkie like myself then you should probably check it out.

Photo of the Week: I took this photo of the Christmas tree in front of the Hancock Building while working from Chicago, Illinois this past week.