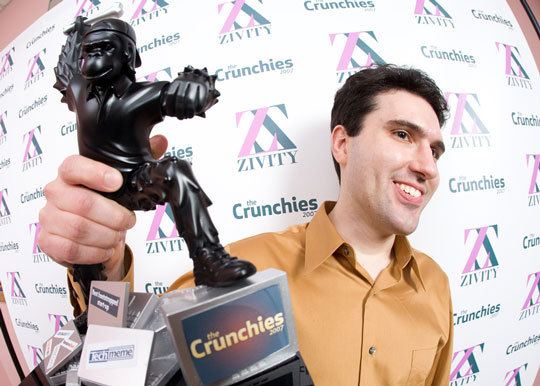 Photo of the Week: Gabe Rivera of techmeme shows off his award for best bootstrapped startup at the 2007 Crunchies (more Crunchies coverage below). Photo taken by Zivity.

The Crunchies 2007
The results are in from the joint awards event between TechCrunch, Read/Write Web and GigaOm held on Friday, January 18th. Brian Solis covered the 2007 Crunchies and took some super photos from the event. While TechCrunch offers up the Winners. If you missed the event this year you can watch the 2007 Crunchies online.

Air: The Only Thing Left In Your Wallet After You Buy Apple’s New Laptop
At MacWorld Steve Jobs unleashed the new Apple ultra slim and portable MacBook Air laptop. It is super expensive and does not allow you to take the battery out but it still looks pretty slick and would not mind having one.

17 Ways You Can Use Twitter: A Guide for Beginners
If you are new to Twitter you should read this article by Dosh Dosh.

The "Google generation" not so hot at Googling?
A new report sponsored by the British Library and the Joint Information Systems Committee, tries to get beyond the stereotypes to find out just how good young people are with information technology, and what the implications are for schools and libraries.

Social Networks, from the 80s to the 00s
GigaOm takes a look at the brief history of online social networks.

Filmmakers on the cutting edge
With Sundance Film Festival happening in Utah find out how filmmakers are leveraging some new technology.

Ad rates may drop in 2008
Createlf explains how only the aggregators are the big winners, the long tail of users who publish content will stand to loose the most.

Is Mobile Food Ordering Here To Stay?
We reported on Papa John's getting into the mobile ordering game exactly two months ago. Today we have learned that PizzaHut has also stepped into the mobile game allowing you to order your favorites from anywhere using your sms device.

Facebook: Slowly becoming my (default) platform for email
Jeff Pulver explains how he is finding himself using Facebook messaging rather than email more and more these days.

MP3 Search Engine with Free Music Downloads
Similar to Songza and other music search sites, seekmp3.info is a good search engine that helps you find music you like on the web, then allows you to listen and download your favorite songs to your computer.

Photo of the Week: Gabe Rivera of techmeme shows off his award for best bootstrapped startup at the 2007 Crunchies (more Crunchies coverage below). Photo taken by Zivity.