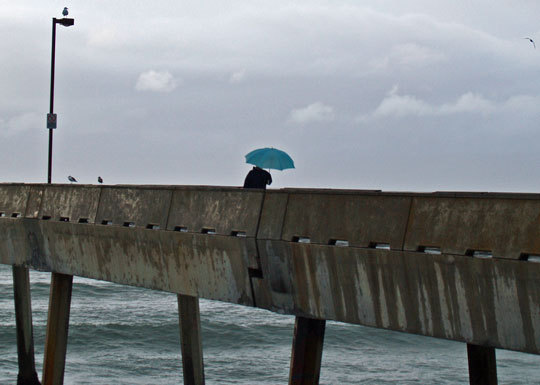 Photo of the Week: The weather in California has been a bit moist this past week as this photo by Michael Risenhoover shows.

IgnoreAll: The One-Click Facebook Cleanup Tool
Marshall Kirkpatrick reports on a new way to clean up your Facebook profile from all the random noise and clutter it has been gathering for the last six months.

Mahalo Examined
Orli Yakuel offers up the good, the bad and the ugly about Mahalo the Jason Calacanis backed startup.

TechCrunch’s Heather Harde on the GigaOM Show
The lovely TechCrunch CEO, Heather Harde appeared on this weeks GigaOM show to talk about the Crunchies, her role at TechCrunch, and general merger and acquisition movements in Web 2.0.

YouTube Takes Entire Site Mobile
After several years of talking about it, YouTube made a surprise move today and launched m.youtube.com - a site with nearly all content and functionality available on the website proper now available on mobile.

The Widget Kings
TechCrunch examines the widget space as it tries to determine - who rules the world of widgets?

How to really make money with Web 2.0
DevPay matters to online applications because it will have the same incredible impact on startup economics as Google AdSense has had for online content find out how.

Why Facebook, MySpace, and Twitter Hurt Publishers
Ed Kohler explains how he thinks people will eventually start to realize that they've been spending hours and hours every week generating content that they can't control.

Davos Super Mobile Technology Panel
Mike Arrington was at the World Economic Forum and reports back on the mobile technology panel.

Advice for stale web developers
Clint Ecker offers some good advice on how developers can stay fresh and in the game.

TECH cocktail Chicago 7 Announced
It's time for another social mixer aimed at showcasing some of the local Chicago startup & web/tech talent and there are only a few spots left so RSVP now.

Photo of the Week: The weather in California has been a bit moist this past week as this photo by Michael Risenhoover shows.