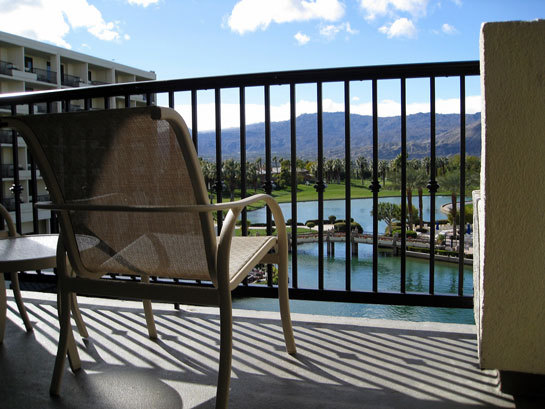 Photo of the Week: This week I spent time at the DEMO08 conference in Palm Desert, California and I snapped this shot from my hotel room balcony.

DEMO08
Every Demo 08 startup ranked from 1 to 72
Tech Confidential ranks every company that presented at the event.

Africa Panel and Top DEMO Picks
Erik Hersman explains the African panel he sat on at DEMO as well as lists the top DEMO picks.

Notchup asks: How Much Would You Pay to Interview Me?
After getting emails from Notchup the week proceeding DEMO08 they launched at the event.

OPENSOCIAL API NEWS
OpenSocial or OpenGadget?
RRW report on how some believe OpenSocial's goal is to standardize widget development.

Is OpenSocial Social at All?
Nick O'Neill just said exactly what I was thinking about Google's Open Social. Is it really social at all? Or was it something rushed out the door to co-attack the Facebook craze that started in the spring of 2007?

STARTUPS
Persai, a personalized online news aggregator
Persai is a site that automatically discovers articles you might like from around the web.

instapaper
Offers an easy no nonsense way to save items to read later.

Etsy: Online market for handmade goods funded, fighting mass production
Etsy, a site for buying and selling hand-made crafts, has raised $27 million in a round led by Accel Partners , with Accel’s Jim Breyer joining the company’s board of directors.

Automattic Launches Group Twitter-style Platform
Automattic has released Prologue, a Twitter style service for groups that is also being pitched as a distributed Twitter.

Lijit Acquires Comment Search Engine BigSwerve
Personal search engine provider Lijit, which raised $3.3 million last July, will announced tomorrow that they have acquired BigSwerve for an undisclosed sum. I have Lijit on my right rail as it offers a very nice search component for publishers.

The LEGO Brick Turns 50
LEGO turns 50 today by the company's own reckoning, as it's the anniversary of the patent approval for the famous little pegged bricks.

Thinking About Tomorrow
How will technology change the way we shop, learn and entertain ourselves? How will it change the way we get news, protect our privacy, connect with friends? The WSJ took a look ahead 10 years, and imagined a whole different world.

Photo of the Week: This week I spent time at the DEMO08 conference in Palm Desert, California and I snapped this shot from my hotel room balcony.