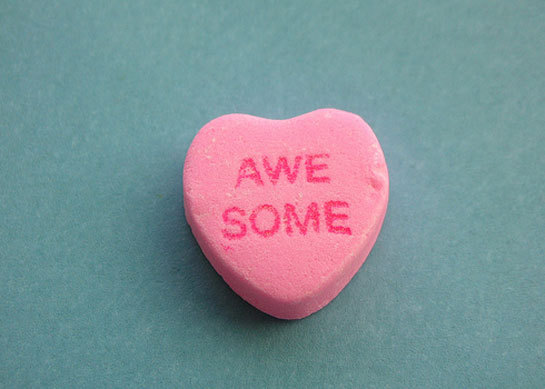 Photo of the Week: Valentine's week was ... AWE SOME as this photo by Lara shows.

WIFI Headlines: Starbucks Dumps T-Mobile
How many times have you sat down with your overpriced Starbucks soy latte and the internet couldn’t connect? Apparently too many times, because Starbucks decided to do something about it. In an official press release, Starbucks got rid of T-Mobile - WOOHOO!

Terrorist Recruiting Through Facebook
AllFacebook.com explains how gangs are recruiting youth through social networks. It seems our friends across the pond (the Atlantic) are having a similar problem but with extremist Muslim groups instead. The Edinburgh Journal also ran similar story about creating jihads through Facebook.

Sustainability: Services - not Products - Are the Key to Aligning Interests
Eric Olson explores "servicing" business models in regard to green or environmentally aligned products.

Zimbra Makes Mail Transparent - Could it Replace Outlook Express?
Zimbra is probably one of the few companies that are creating innovation and are cranking out a great product but aren't heard from often. Zimbra was acquired by Yahoo last September for $350 million. CenterNetworks takes a closer look.

Problem: Social Network Status Discombobulation
Joe Manna explains how he regularly uses MySpace, Facebook, AIM Profiles, Twitter, LinkedIn, Friendster, Emurse among a few others. He wonders: Why can’t all these networks get along and share my status with all my connections?

11 Things To Know About Semantic Web
ReadWriteWeb offers up some things you might want to know.

Tech of the town
Time Out Chicago recently reviewed TECH cocktail 7 and wrote a rather lengthy article replaying some of the TECH cocktail history for those that haven't been following along. Don't forget the following upcoming events: TECH cocktail Chicago 7 and TECH cocktail Boulder. It was sort of a funny feeling to see TECH cocktail news on the pages of Yahoo Finance this past week.

Micro-Hoo.com
Evan Brown from the popular Internet law blog, Internet Cases, has created a site to aggregate some of the commentary from the Microsoft Yahoo deal.

Recruiting 3.0: Web Advances Change the Landscape
WSJ takes a look at how recruiting has changes by saning advances in technology make the way jobs are found and filled online distinctly different from just a few years ago. Employers are now experimenting with innovative strategies for spreading their recruitment messages and screening candidates online.

Tribune Replaces Interactive Division Head
Tim Landon the Tribune Interactive division head was replaced this past week to shake things up at Tribune, my former employer. I am sure more changes are to come - maybe it will push them in the right direction towards embracing the new ways of the Web.

Yahoo in Talks With AOL About A Merger
Is Yahoo looking to join forces with AOL?

Should IAC Merge With AOL?
Saul Hansell takes a closer look at this very question this past week in the New York Times Bits Technology Blog.

Photo of the Week: Valentine's week was ... AWE SOME as this photo by Lara shows.