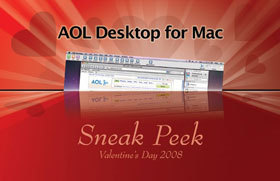 On Valentine's Day, AOL released a sneak peek of the new AOL Desktop for Mac (beta 8), available for all Tiger(R) and Leopard(R) users (10.4.8 or higher). Here are some of the highlights they list on beta.aol.com:

Continue reading for additional details on the new AOL Desktop for Mac.

I tested it out on a PowerPC G4 running OSX. The AOL Desktop indeed installed quickly and easily and launched with a browser open, defaulted to AOL.com, offering me the option to sign in or just begin browsing. One of the biggest differences that jumped out at me immediately is the downplayed AOL branding. It was refreshing (even as an employee) to just see a simple "AOL Desktop" in plain text in the upper left apple menu. They've let all the internal applications like email and  AIM stand on their own without branding every screen. That alone gives it a more simplified yet sophisticated look and feel. 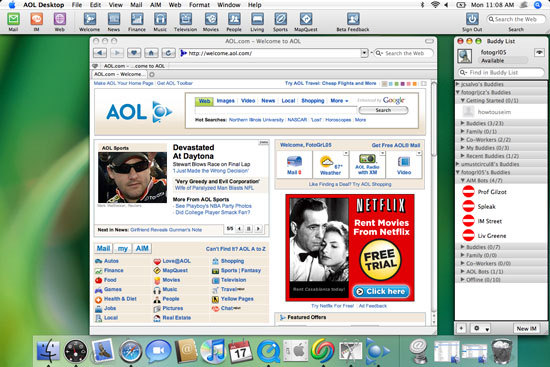 Once installed, you see a toolbar across the top with several simple, iconic-style buttons, a buddy list down right side, aol.com default page loaded in the browser in the center and that's it. Overall it feels very Mac-like and integrated but not quite as immersive or restrictive as the AOL client options for the PC. The AOL desktop for Mac is more "Windows" like, allowing you to see your computer desktop, which the old AOL clients for Mac did as well.

Mail, IM and Web are the 3 key features, indicated by slightly brighter colored icons in the upper left corner. Next to that they've included a number of AOL properties: AOL News, Money & Finance, Music, TV, Movies, People, Living, Sports, MapQuest, and for now, a button for beta feedback. There is an option to customize the toolbar, which was fairly limited, but will likely offer more options over time.

Mail is basically like AOL Webmail, but sans branding and with a sleeker design. Fortunately, it retains the 3 pane design, but unfortunately doesn't seem to offer the right-rail with widgets that AOL Webmail currently offers. Perhaps that is on the roadmap in the future? Multiple mail accounts (IMAP/POP3) are not supported yet but that will be added, according to the site.

A few other convenience features include AIM profile search as a menu item, very clear options for clearing your cache, erasing your browsing history, increasing text size (trust me - more people ask about those things than you'd ever guess) and other formatting options. Full AOL Keyword support is another convenience that isn't fully there yet but will be added soon.

Overall the new AOL Desktop for Mac seems to be a great direction for AOL applications - greatly simplified with a laser-focus on the most important communication features. It would be nice to see more community and personalization features added soon (ahem...) but otherwise old-time Mac users who long ago abandoned AOL should check this out and consider giving AOL another go. For more information about what the Mac team at AOL is up to, check out their blog: http://macblog.aol.com.

On Valentine's Day, AOL released a sneak peek of the new AOL Desktop for Mac (beta 8), available for all Tiger(R) and Leopard(R) users (10.4.8 or higher). Here are some of the highlights they list on beta.aol.com:

Continue reading for additional details on the new AOL Desktop for Mac.