SOMEWHAT FRANK -- offers candid editorial on Web & Personal Technology and Social Media through the blog SOMEWHAT FRANK and video podcast SOMEWHAT FRANK TV. SOMEWHAT FRANK was named one of the best Web 2.0 blogs, has been named as a "must know" blog for startups and was also selected by Intel as an Intel Insider brand ambassador. SOMEWHAT FRANK is more than just a publication as it also offers boutique consultancy services and hosts and sponsors community events. Through SOMEWHAT FRANK you can connect and share your SOMEWHAT FRANK opinion with its worldwide audience of business and tech industry leaders, venture capitalists, investment professionals and entrepreneurs. SOMEWHAT FRANK is published by SOMEWHAT FRANK, LLC. 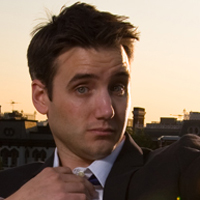 Astrological Sign: Taurus (Mess with the bull, you get the horns.)

I enjoy: Sunshine, strumming my six-string, long walks on the beach, baseball, mojitos and taking photos/videos of pretty much anything that moves.

Bio:
Frank Gruber (@FrankGruber) is well known new media journalist focused on sharing his Web product expertise and analysis on Web 2.0, social media and emerging technologies in articles and videos online. His works have been featured in TechCrunch, iMediaConnection, ReadWriteWeb Network and on his popular personal tech blog, Somewhat Frank. He keynotes regularly about entrepreneurship, emerging technology trends, social media and his love for the “shiny objects” or Web products across the country at industry events. Frank has been dubbed by the Washingtpost Post and LATimes as a "digital nomad" for his on the go work anywhere and everywhere lifestyle. Frank was also named on of 100 DC Tech Titans by Washingtonain Magazine in May 2009.

Frank co-founded TECH cocktail with Eric Olson, in Chicago (Frank's hometown - Go Cubs!) in 2006 to help better connect and amplify the local technology signal and have some fun doing it. Since 2006, TECH cocktail has grown to become a media company offering technology news, events and community-powered projects open to technology enthusiasts, entrepreneurs & professionals interested in the latest technology in their community.

Frank was formerly a product strategist and evangelist for the Aol social networking group, which included such products as AIM, SocialThing, Goowy, Bebo and ICQ with a focus on communications and lifestreaming products. Frank was instrumental in connecting Aol with a number of industry experts, media and start-ups (some of which were acquired by Aol). Frank’s previous team was also responsible for the launch of the widget driven myAOL personalized homepage/startpage product in 2007. Frank departed Aol right before the Aol spinoff January 1, 2010 (as covered by TechCrunch).

Frank currently lives in Washington, D.C. but travels a lot as he circles the globe speaking, hosting events and helping to amplify the local technology signal.

In The News Archive:

Thanks for stopping by Somewhat Frank

After spending five years (from 2005 to 2010) updating Somewhat Frank day and night covering the tech beat, web 2.0 and social media booms I decided in 2010 it was time to redirect all my editorial and writing energy to grow Tech.Co (previously called Tech Cocktail) into a full-fledge media company. This move coincided with deciding to dive off the entrepreneurial diving board and quit my day job building social networking and personalization products for millions at Aol to go all in on my own ventures - life is too short not to. I wrote a book called Startup Mixology and shared some of my learning from the adventure. After growing TechCo to millions of readers globally my TechCo journey came to an end in 2018 as TechCo was acquired by MVF Global.

Ok so back to Somewhat Frank, this site was a top Web 2.0 blog along with the likes of TechCrunch, Read Write Web, Mashable and more. Somewhat Frank was even referenced in Gary Vaynerchuk's NYTimes best selling book Crush It, on page 86 - and in Gary's rap video. I am proud of what Somewhat Frank was able to accomplish rolling solo back then with over 160,000 RSS and email subscribers. Now I'm back with a new format, an audio podcast. So I hope you enjoy it.

Posted at 10:53 PM in About Somewhat Frank | Permalink