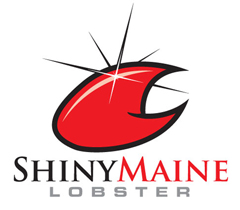 I am excited to share some news about a Shiny Heart Ventures project I have been working on for the last couple months. My partner at Shiny Heart Ventures, Jen "@noreaster" Consalvo comes from a little town near Kennebunkport, Maine. She grew up there and her family still lives there. Her dad, Captain Dave is a retired Merchant Marine and Nuclear Engineer who has returned to his passion of lobstering - something he has been doing for over 45 years.

This summer we visited Captain Dave and his First Mate "@LobstahLady" Frannie in Maine and did some lobstering. While we were there they explained how hard lobstermen work and how they are basically being undercut more and more each day as the price lobsters continues to fall while it stays stable in restaurants around the country. This seemed unfair to all of us. Jen and I saw an opportunity to help them by cutting out the middle men and selling their fresh Maine lobster catch directly to consumers via the Web.

Amazon To Acquire Zappos For $807 Million

I just got word that Amazon has acquired Zappos for over $800 Million. Amazon Founder and CEO Jeff Bezos just released a video sharing the Amazon story and mentions Zappos (above). Zappos CEO Tony Hsieh shares the good news from his perspective too.

Zappos has been setting an example for companies to follow by putting customers first and embracing social media religiously to do so. CEO Tony Hsieh is a big Twitter user and you can follow him at @Zappos. This past year Zappos has also been on a mainstream media tear, sharing its culture and views on happiness along with selling LOTS of shoes and gear along the way.

Over the past year, I have worked with Zappos CEO Tony Hsieh on a few occasions, co-hosting a CES Kickoff party in Vegas and I even got a suitcase from Zappos at SXSW. Not to mention, seeing him speak at SXSW and Startup2Startup among other industry events. 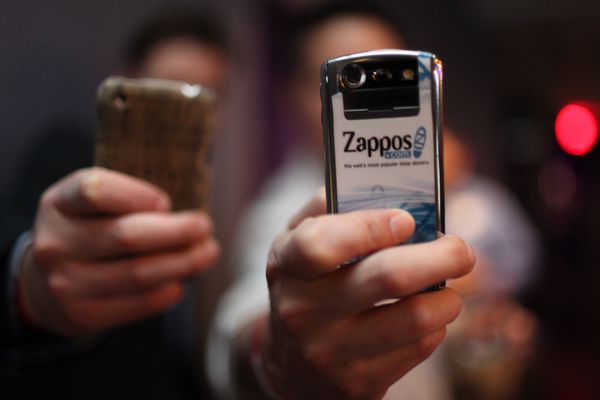 Showing our phones at CES Kickoff event. Photo by BrianSolis.com

You may notice something looks a little different on SOMEWHAT FRANK these days. I decided after over three years of designing my own logos to have the design community take a shot at it. I had an idea of what I really wanted so I was just looking for a logo to be used with an photograph header taken by Washington, D.C. photographer Dakota Fine. If you are like me, you probably want to see a lot of design options and then pick the design you like the best. This is exactly what Chicago-based startup CrowdSpring offers by creating a crowdsourcing design marketplace. I first reviewed CrowdSpring when they launched back in May and showed off at TECH cocktail Chicago 8.

In this article I want to share my CrowdSpring experience as I launched a new SOMEWHAT FRANK design based on a logo design (in the up left corner of the site) received using the design community site. 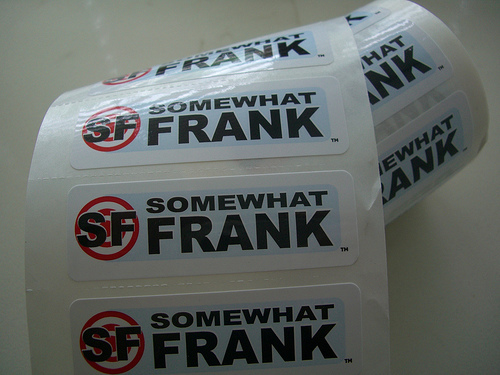 Stickers are part of the Web 2.0 culture as just about every startup, blogger and social media expert knows. I recently got a package delivered to me from the StickerGiant.com, a Colorado-based sticker company, which was filled with stickers that sport the SOMEWHAT FRANK logo. They are awesome - thank you StickerGiant!

WE ADD UP T-Shirts Count Your Green Efforts

What are you doing to help combat global warming? WE ADD UP looks to help you answer this very question by making it easier to make it blatantly clear on a t-shirt. We Add Up is counting each and every person that takes a green pledge which includes twenty plus different options from buying a hybrid to showering together. WE ADD UP puts a hand printed number on each shirt that helps to count identify your number in the global count. WE ADD UP prints its shirts on organic t-shirts.

Continue reading "WE ADD UP T-Shirts Count Your Green Efforts" » 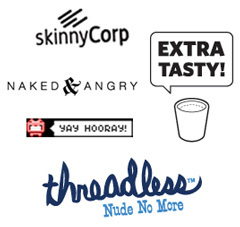 Naked & Angry is a high quality clothing from fabric patterns submitted and chosen by the brand’s audience.

Yay Hooray is an 'old-school' forum used to help skinnyCorp learn how to make community-driven sites on the Web.

They have also have a few others. I visited the Chicago-based skinnyCorp headquarters this past week and captured some of it on video.

Looking for a little help on your next home project? If you live in the San Francisco area you might be in luck as GenieTown, a Palo Alto-based startup founded by a group of Stanford entrepreneurs, officially opened to the world today. GenieTown offers a platform for anyone looking for local services to either browse through a broad range of specific service providers or post a job request and invite qualified responses. GenieTown creates an eBay-like marketplace for services.

XING, the social network for professionals which is extremely popular in Europe, has just published some numbers showing off its continued growth. According to a recent release, XING, has 5 million members registered which has contributed to reached revenues of 19.61 million euros or approximately 28.74 million U.S. dollars. XING founder and CEO, Lars Hinrichs had this to say:

"We delivered outstanding results for the 2007 fiscal year, and have already demonstrated this year that XING is not only an active consolidator in the European business networking market, but is also striding ahead with organic growth and has shown incredible innovation."

Some of this could be attributed to additional revenue streams that were created by expanding XING's e-Commerce and Advertising.

eBay Seller Boycott Could Give Startups A Shot

A movement that started as a thread in the eBay forums has turned into an all out eBay Seller Boycott from February 18 - 25. The sellers on eBay have united and are staging to lash out against eBay for recent seller fee raises and feedback changes. A similar eBay boycott was successful for sellers in 2005 so it appears they are looking for a repeat success. They have even created a YouTube video for the eBay boycott.

I am not a big eBay buyer or seller but I think this little boycott could give other startups in the space an opportunity. If you are looking to sell handmade goods you might give Esty a try. If you are looking to just get rid of something in your local area you could leverage craigslist or Kijiji. There are lots of other options as well, so if you have a startup that is an alternative to eBay share it with SOMEWHAT FRANK by dropping a comment with the information.

Looking to sell your music, art or videos online but don't know where to start? Hurox pronounced "who rocks" is looking to help. Hurox is a Kansas City-based startup that recently launched an early beta product looking to help people create a place to sell goods on a social platform. Positioned to help artists sell their work (i.e. photos, videos, music, etc.) Hurox offers tools that enable anyone to create a page and sell their goods. Users can either sell their content or revenue share to earn credit for page views off of the unlimited number of pages that they create on Hurox.

If you have ever looked for concert, theater or sporting event tickets then you probably have heard of TicketsNow and Ticketmaster. TicketsNow an online tickets site founded in the Chicago northwest suburb now based in Rolling Meadows and Crystal Lake, Illinois has just announced it was acquired by InterActiveCorp’s Ticketmaster for $265 million as just reported on TECH cocktail.

I spent many summer days as a child attempting to sell lemonade to anyone that passed by. I cannot say it was that lucrative a business and recall spending a lot of time waiting and waiting for lemonade customers. Aside from a solid suntan from my hours spent waiting I also learned that lemonade stands are all about location, location, location. Lemonade has taken the idea of the "lemonade stand" to the Web making it easy to recommend items you like on sites where you already have visitors.

I think we would all rest more assured if we had a clearer picture of our health outlook. If we could better understand the makeup of our DNA we would be clearer on what hand we have been dealt by our ancestors. 23andMe, a Silicon Valley-based startup that launched in mid-November, looks to make it easy to get a clearer picture by offering at-home DNA tests kits.

Nudo: Give The Gift Of An Olive Tree

I love olives and just about any product made from olives. If you know someone like me you might be interested in getting them a gift that keeps on giving - adopt them an olive tree. Nudo is a Le Marche, Italy-based company offers the opportunity to adopt an olive tree online and will send you products from your tree all year long.

Continue reading "Nudo: Give The Gift Of An Olive Tree" » 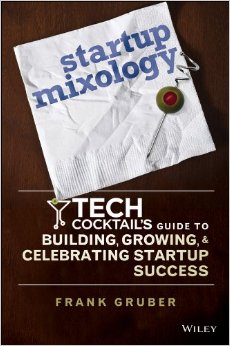