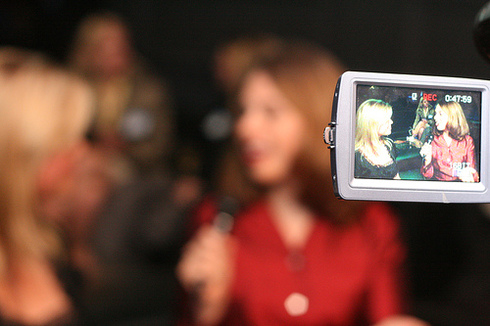 Photo of the Week: This photo was taken by Brian Solis of a video camera recording Sarah Meyers interviewing someone at the May 2007 Girls in Tech in SF.

Watch TV Stations From Your Web Browser
More and more services are popping enabling users to watch full screen videos right from a web browser. They kind of all have a similar television look & feel. It even looks like some of them inspired by Joost style.

Google Launches Universal Search
Google announced yesterday its new search system intended to bring together all of Google’s broad assortment of searches into format that should be more convenient for users. Google’s vision is to ultimately search across all of googles content and to

Did Microsoft go lose it head over aQuantive?
Just how wacky was Microsoft’s $6 billion bid for aQuantive? GigaOm tries to illustrate it in this article.

Who Will Be America's First TechPresident?
This challenge to all candidates was made on the TechPresident site earlier this week.

Feed Crier climbs into bed with IMified
By becoming part of IMified, Feed Crier will be able to offer more features to our users. Maybe reblogging alerts directly to your blog from your IM client. Or subscribing to alerts from sources other than feeds (think Google Calendar, To Do list reminder, etc.).

Enterprise RSS - 3 Major Vendors Show The Way
Forrester has just released a new report on Enterprise RSS. Specifically it tackles the issue of information overload in the corporate environment, now that RSS feeds are an important source of information in the workplace.

MyBlogLog to Rebrand and Make Significant Changes
MyBloglog is really only known amongst the first adoptors and blogosphere but it appears Yahoo will soon be positioning it for the mainstream.

Attensa, a Portland-based company, has continued to improve upon its enterprise RSS feed reader solution which I highlighted previously, by releasing Attensa 2.0. Attensa believes that an Outlook integrated feed reader is a core requirement for large corporations.

Attensa 2.0 offers all of the same features of the previous 1.5 version including the ability to leverage "attention" click stream data to fight information overload as the most influential information is bubbled to the top. Attensa 2.0 offers the ability to set desktop alerts to deliver server alerts, out of inventory updates, pricing changes or other specify needs. 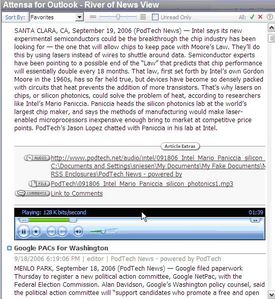 Attensa responded to feedback from its Attensa 1.5 corporate integrations and now offers audio and video podcasts inline. Inline audio and video enabled corporations to easily enable podcasts for corporate training and other internal uses as enclosures do not send users to external sites or intranets sites for playback. The screen-shot to the left shows an audio file being played inline.

Attensa 2.0 is being offered with forum support and a PDF user guide for free! Additional support and access to the Attensa knowledge base can be purchased for $24.95 per year per client. For more information on Attensa 2.0 check out these articles on TechCrunch and the Attensa Blog.

There are a number possible uses for RSS within the corporate environment. Anything that can be done via email most likely can be done using RSS with the additional benefit of having increased metrics on the communication’s reach, which can ultimately help to gauge its success. An RSS stream could be used from something as primitive as a mass communication or as targeted as corporate building services communications (i.e. fire drill, fridge cleaning, phone upgrades, etc.). Corporate RSS could be used for secure items such as financial statements, project management, paycheck stubs and top-secret abstractions. Not to mention, corporate RSS could be used for rich-media communications via podcasts and video-casts for shareholder meetings and training, among other things.

AES:RSS is a self-contained Linux-based server that has simplified the deployment process, thus making all of these corporate RSS dreams a simple reality by offering an enterprise solution as a piece of hardware, which comforts even the most stringent corporate IT. Most corporate IT professionals know the ease of plug-and-play hardware versus having to install and configure a server with a product themselves.

A major benefit of the Attensa server solution is that it will go out and pull down RSS feeds for the various users within the corporation once and then distribute them all via the server. This takes some of the stress off the corporate infrastructure by limiting the number of repetitive feed retrievals. Feeds are then presented to user with slick AJAX web-based feed reader. Administrators within the company will also be able to create RSS messages an AJAX web application.

In speaking with Matthew Bookspan, Director of Product  Management at Attensa, the company has been busy with the AES:RSS in addition to revamping its online feed reader, which I highlighted prior to being updated for a post on TechCrunch comparing the online feed readers. Attensa also offers a desktop solution and a mobile solution, both of which sound pretty interesting, though I have not used either of them so cannot comment on their capabilities.

I should mention a few other competitors in the Enterprise RSS space: Newsgator Enterprise Server and KnowNow Enterprise Syndication Solution. Both use similar enterprise server solutions. KnowNow in particular has been implemented by Rentals.com to help manage its lead notification process.

However, Attensa offers more than just the server; Attensa also uses "attention," as I highlighted previously on Somewhat Frank, to offer corporations valuable metrics on usage and influence. Attention can be used by employers to monitor who is producing the most influential content and use it as a gauge for rewards. It also can be leveraged to fight information overload by having the most influential information bubble to the top. I could see Attensa even taking it a step further and look forward to seeing what they come with in the next couple months. The pricing for AES:RSS is still unclear but I would presume is will be comparable to other hardware options like Google Mini and others. Be on the lookout for more to come from Attensa.