TechCrunch In the City

TechCrunch 8, an event celebrating the web 2.0 movement, took its show on the road to New York City this past week (November 16, 2006) and I traveled to be in attendance. AOL supported the event by being one of the many sponsors. 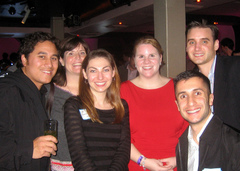 AOL also had space at the event to demonstrate AOL Video, SearchVideo and the recently updated dev.aol.com. A small group of AOLers snagged the daily corporate shuttle from Dulles to NY. It was my first trip on the corporate jet and was definitely a memorable one as we maneuvered in front of a nasty line of storms.

We were not the only guests flying in for the event. There were people in from all over the world. I met TECH cocktail co-founder and friend, Eric Olson at the event who flew in from Chicago (though weather delayed him for three hours). 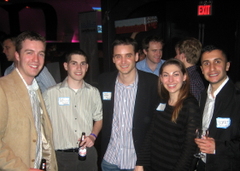 Jeff Pulver and Chris Brogan dropped in for awhile. I got a chance to meet Greg Galant the popular voice of the VentureVoice podcast. I even ran into old Tribune colleague Matt Terenzio who was nice enough to bring Mike Arrington a pretty sweet stogy. Digg CEO Jay Aldeson was also in the house but unfortunately, the crowd around him never died down enough to chat.

TechCrunch 8 was held at BED New York, a comfortable but swanky nightclub made famous by its mainstream placement in episodes of the popular sitcom, Sex in the City. BED is usually filled with a number of beds, hence its name, but many of the beds were removed to accommodate the large crowd and lend to comfy conversations about web 2.0. The guys from Fleck flew in from the Netherlands to launch at the event - of course, I signed their white suits. HitTail had decked the place out with balloons and other schwag and demonstrated their publisher metrics system. 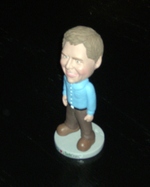 While Compete showcased its consumer facing metrics offerings and gave out interesting bobble head schwag including a Mike Arrington bobble head – a nice touch. Me.dium showed off an interesting browser sidebar product which I will talk about in more detail soon. Eurekster, a company I have written about previously, was previewing some new features and even had the Somewhat Frank logo in its slide deck. You can see Eurekster in action in the right rail. PartyStrands seemed to feel right at home at a party since its product offering is a SMS controlled collaborative social jukebox. They had had logos flying all over the venue. CozmoTV also explained its personalized TV product. There were a number of other companies as well which are mentioned in this TechCrunch article.

For more details on each of the companies that demonstrated  check out this TC8 wrap-up by Read/Write Web. Valleywag has posted photos and a wrap-up here. Check out public photos from TechCrunch 8.

Bottom-line: TechCrunch 8 united web companies from across the globe to a swanky NYC club to an entertaining evening of mingling and checking out the latest product offerings.

Google has launched a custom search engine today (October 24, 2006) called Google Co-op. Co-op enables  a user to create and launch a customized search engine which includes just a few specific websites. This should make for an interesting competition between a crowd of other products which includes Rollyo, Eurekster Swicki and Yahoo Search Builder. According to the Financial Time report:

"Users of Google Custom Search Engine will be able to select the websites they want to be included in their searches, and add to this list in future by “tagging” websites they visit. Any searches will then return results just from that slice of the Google search index."

This launch does not surprise me as Google has been missing out on search growth in the hot vertical search market.

I would highly recommend checking this article out for more detailed analysis of each of the six categories.

A Laid Back Friday in SF

After a long Thursday at the Supernova 2006 conference and a spirit-filled evening with Gabe Rivera, creator of Techmeme, Mike Arrington, Tantek Celik, Jennifer Allen of Eurekster and a number of others I decided to ease into Friday.

I visited the breakfast buffet at the Palace Hotel, mingled in the Supernova hallway a bit and then decided to walk a few blocks to CNet Network Headquarters, the location of BloggerCon IV organized by Dave Winer and company. I sat in a session lead by Chris Pirillo that focused on the user experience. I noticed Niall Kennedy, Steve Gillmor, Dan Farber, Doc Searls and Lisa Stone were all participating as well. Jeremiah Owyang was also sitting front and center and we chatted briefly. But staying with the low key theme of the day, I decided to duck out of BloggerCon with Jennifer Allen of Eurekster. 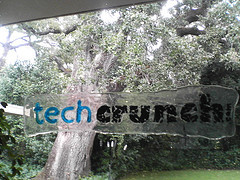 We grabbed a quick snack and headed to the Eurekster office where I met CEO Steven Marder. He was gracious enough to let me use the conference room for a few hours of catching up (I am still a little behind on emails). Though Jenn and I were both signed up for the BloggerCon dinners, we played it low key and rolled to the TechCrunch Casa for a little while. Upon arriving we were greeted by a sunburned Mike Arrington, Richard MacManus and the happy, tail-wagging Laguna. It was great to meet Richard -- I am a fan of his work but had never met him in person.

It was a very laid-back, pleasant evening filled with pizza, tunes and conversation. I appreciate the hospitality by all.

Rojo, a San Francisco-based online feed reader company which I previously reviewed favorably on TechCrunch, has quietly launched a blog search engine feature based off the large abundance of feeds the online feed reader is currently tracking. The search engine feature also takes into account Rojo's feed reader rating system call "Mojo." Rojo has also recently expanded its "Mojo" feature to be used on any web page on the web via a bookmarklet. The Rojo blog explains it by saying:

"Think of it as feed reading meets smart bookmarking: tag pages, share them with friends - and find them again easily."

This expands Rojo's reach to not only the blogosphere but also to the web and positions Rojo into not only a feed reader but also a community or social search which could rival that of Eurekster's Swicki product among others.

I noticed the search text box appeared in the top right corner of the Rojo feed reader a few weeks ago but for some reason did not realize it was a new feature since I believe it replaced another text box which allowed you to add a new feed.

I was made clear it was a new feature when I received an email newsletter from Rojo which point out how to add Rojo blog search to your Google Toolbar search toolbar.

According to a recent article by Mike Arrington on TechCrunch highlighting the launch of the Rojo blog search engine:

"This is just a first pass at search. Chris (from Rojo) tells me they will be relaunching with a new interface in a couple of weeks."

However, Rojo looks to be positioning itself for more than just blog search. Rojo appears to be targeting community search and we can expect Rojo to rollout even more search initiatives soon.