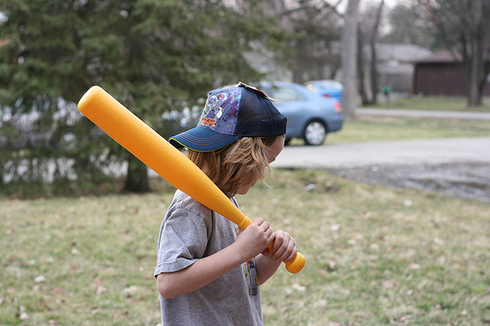 Photo of the Week: Opening Day 2007 for Major League Baseball is today so enjoy the photo above by Betsy titled New hat, in honor of the start of the 2007 baseball season.

TechCrunch Has Acquired F*ckedCompany.com
Playing a little April Fools joke? Will Mike Arrington come back with a follow-up post that says something similar to the lyrics of a Marshall Mathers song? Something like:

"Hahaha, I'm just playin' ladies. You know I love you."

In all honesty, it actually would make sense for TechCrunch to take on some other brands to expand its reach.

Apple Announces Unlimited iTunes Subscription Service
iTunes will launch an all-you-can-eat subscription service in June, according to sources at Apple Inc. The service, which will cost around $100 a month, will offer unlimited downloads of videos and music tracks from iTunes’ extensive catalog.

Dave Winer’s Scripting News Celebrates 10th Anniversary
One of the oldest blogs in existence, Scripting News, run by software and web pioneer Dave Winer, is celebrating its 10th anniversary on April 1, 2007. Congrats to Dave Winer for keeping it real for so long.

The 9 Essential Posts that Every Blogger Should Know
Do you ever get blogger fog (similar to writers block)? It could happen and this article addresses 9 post ideas you could fall-back options.

10 Most Popular Brands on Digg
Pronet Advertising looks at the most popular brands surfacing on Digg these days.

Love Doesn’t Equal Loyalty: Online Dating in February 2007
I recently became single again after a couple of year relationship so I figure it best I find out what is going on with the online dating scene since I just don't have the time to go out and find people to date these days - I hardly have time to get ample sleep.

Best New Mashups: Diversions
ProgrammableWeb has posted some interesting mashups that are worth checking out if you have some free time.

BlogRovr Fetches Content From Your Favorite Blogs
BlogRovr is an interesting new way of getting blog information, on the go while you're surfing the Web. It is a download plugin for Firefox 2.0, which works cross-platform on Windows, Mac and Linux. There is currently no IE plugin, but plans to support for IE6 and IE 7 soon.

TailRank Opens Service As A Platform
TailRank, a popular blog news organizer that competes with TechMeme and Megite, has opened up its back end and will provide the service as a platform called Spinn3r for application developers who would like to add a blog index and ranking service. Spinn3r is said to have a 1 million blog index.

Ficlets recently launched a community to allow users a place to let the creative juices run free. What is a ficlet? By definition:

"A ficlet is a short story that enables you to collaborate with the world."

Once a ficlet is written and shared, any other community member can pick up the narrative thread by adding a prequel or sequel. Like a "choose your own adventure" story, with Ficlets you know where the story starts but you don't know where the story will end. So if you start a story you might want to keep checking back to see where the rest of the community takes it. Ficlets are short stories so they range between 64 and 1024 characters.

Ficlets looks to inspire ficlet writers by offering story starters, story enders, this day in history and Flickr photos. Users can search by tag for inspiration. Ficlets is a creative, longtail site that I could see ficlets being extremely compelling to creative writing students and educators. 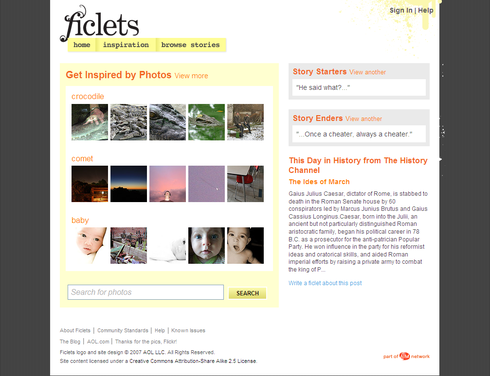 Ficlets was developed by a small team of AOL developers as part of the AIM Network. Interestingly, Ficlets is AOL's first OpenID site that doesn't not rely on creating a AOL /AIM screen name to use it. According to a recent post by AOL developer Kevin Lawver:

"Ficlets is very much an experiment (we like to call it "a prototype we just happened to launch"), and this is our very first release (we're the first product in AOL to roll out on Rails, so we've still got stuff to learn about it...). So, things may go weird and wonky from time to time. Just give it a minute, and then reload."

For information and updates on Ficlets be sure to check out the Ficlets Blog.