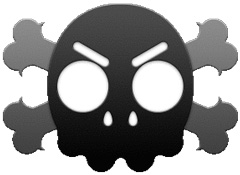 URLRURL Giving Other URLs A Run For The Money

In case you have not already heard the news today, urlrurl.com is coming out of stealth-mode, to launch a link shortening service which will revolutionize how links and information moves across the Internet on April 1st.

urlrurl.com stands out from other link shortening services because of its patented Relay-Stick™ algorithm, which dives into the links put through its shortener and exposes common memes across the pages people are clicking on. It also leverages the Twitter API to maximize meme tracking.

urlrurl.com is a New York-based company with development offices in China and is backed by a group of angel investors called Rat Pack 2.0.

Continue reading "URLRURL Giving Other URLs A Run For The Money" »

With the Hollywood writers on strike  many of my favorite television programs have either stopped production or have had to improvise. 30 Rock where Alec Baldwin portrays a NBC executive is included in this list. A video surfaced before the holidays of another role that Alec Baldwin has recently taken on as AOL's Extra Senior Vice President of Special Excellence. With the Facebook news wall users get an aggregation of friend updates to keep tabs on whats going on in their social circle. Wouldn't be great if you could just watch your Facebook news wall just like the evening broadcast news on television? Well now you can, sort of...

Are you a celebrity news junkie? If so, you might want to check out Fafarazzi and put your celebrity tracking habits to use. Fafarazzi, a Massachusetts-based startup created by Eastland Media,  offers place for celebrity news lovers to go head-to-head via celebrity fantasy sports leagues.

A Video Tribute To Internet People

There have been many people that have become "Internet famous" thanks to the shift to the user contributed content of Web 2.0. Thanks to the animation of Dan Meth, on his ChannelFrederator series The Meth Minute 39, we now can enjoy a tribute to all those viral video stars of the past couple of years.

Looking for comedy on YouTube? If so, you might want to check out Funny or Die. The site launched a few months ago but has been attracting some attention as it offers up community-vetted viral comedy videos produced by some popular comedians. You may have already seen The Landlord (shown below) is short sketch that stars Will Ferrell. Interestingly, Gary Sanchez Productions co-owned by Adam McKay and Will Ferrell, took the idea of Michael Kvamme and created Funny or Die.

The idea behind the site is simple, Funny or Die enables its users to upload funny videos and then the community can vote on the videos and decide whether they are funny or die by being sent to the crypt. According to the site there are a few additional levels which are explained as follows:

Immortal: This video shall live forever like Thor or The Fonz.
Walking Tall:  In great shape.
Kinda Cute: Worth a chuckle or perhaps a guffaw.
Uh-Oh: Not doing so good.
The Crypt: This video flat lined.

For an Immortal video and if you cannot get enough Will Ferrell you might want to also check out, Third Date (shown below) or Will Ferrell as George Bush. Jimmy Fallon also has joined in and produced a spoof of Internet famous lonelygirl15, called lonelyfallon32. Bill Murray will also be making an appearance soon.

Bottom-line: Funny or Die is a great place to upload and vote on funny videos and laugh a little bit.

Gizmoz, an Israel-based company, offers a suite of tools for generating animated avatars and buddy icons thus enabling users to create messages to share over email, the web or even instant messenger. You can create an custom animated message by selecting an avatar to deliver the message and then either recording a 20 second message, typing a message to be converted into an audio voice or by selecting a pre-recorded message. Upon selecting an avatar and message option you can preview the animated video before sharing it with others. However, all messages that are created on the site are placed into a public gallery of Gagz for others to watch, rate and share. I created an animated avatar and have embedded it for viewing above or by visiting this link.

In addition, Gizmoz is working a product called Headz Maker that allows anyone to create a custom talking head from a facial photo. TechCrunch previously reported more details on the head maker. It sort of reminds me of Max Headroom, are we catching up with the technology forecasts of 1985?

Vent Your Frustrations to the Web?

Do you get frustrated at school, work or home? Do you need to get it off your chest? You are not alone! While many look for ways to blow off steam (i.e. exercise, sex, drugs, alcohol & rock-n-roll)  B*SH recently launched to attempt to provide a safer, web equivalent. B*SH, the self-proclaimed "new four letter word," is very simple site that allows users to post their rants, raves and complaints about home, work or school on the web for all to see. The idea is that the Internet is so vast that some of it could be used for venting. B*SH users can then come by and rate others complaints. Though it may sound like a great idea after a dozen beers at the local pub, B*SH appears to be more of a novelty site with no clear revenue intentions. To date B*SH has received a very limited number of user contributed complaints. Maybe people just would rather complain to a human in person than type their gripes on the web.

Rather than clogging up the Internet with negativity, I would suggest taking your B complex vitamins, exercising regularly and getting enough sleep to combat frustrations and remain happier. I guess you could scream at the top of your lungs too (like the image above), but I don't know if it will work.

Bananas are one of the most popular fruits on earth. They offer nutritional value by possessing potassium and dietary fiber. What does this have to do with the web and technology? Nothing until now, as Somewhat Frank recently fell victim to Banana Name. 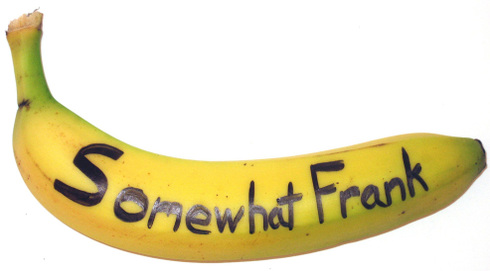 Banana Name is a new blog that showcases the names of other sites as well as local businesses written on a banana.

"Changing the world one banana at a time."

Banana Name is a unique way to discover new things on the web. Banana Name is the brainchild of Ed Kohler and leverages people's love for their name in lights which I have discussed previously on Somewhat Frank. Also it sort of reminds me of Post Secret, the project that allows users to contribute their secrets to be published anonymously on the web and in a book. While Banana Name doesn't ask for user contributed content, you can get your name on a banana by requesting it. Go bananas!

A Web Of Superheroes 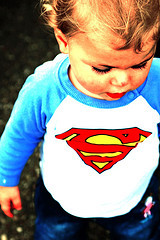 So you probably have seen by now the slew of articles that start out "What superhero are you?", "What superhero am I?" or "I am <fill in the blank with a superhero name>." To further amplify the signal of this blogospheric chain-letter, I will participate in one final meme of 2006. A few weeks ago I was tagged for the "5 things meme" and participated by posting 5 things about me - this time it is the "superhero meme." Upon answering a number of random questions on a rather amateur looking, Google Adsense-heavy web site, I received the following results:

You are The Flash

I guess all those years of childhood wearing superhero underoos have somehow paid off! Which Superhero are you?

Officemax has produced a suite of holiday themed micro-site flash applications with viral marketing in mind.  One of the applications in particular enables you to fulfill your holiday dreams. That's right you can dance like an elf on the Internet with Elf Yourself!

A friend of mine pointed the site out to me yesterday and of course I needed to immediately elf myself. Unfortunately, I don't drop to the snow and show off my break-dance moves but I still bust a move with the best of them.

The Officemax tab in the lower right corner of the site offers a view of the additional micro-site applications which all seem to be focused at spreading the Officemax cheer. Some of them include:

Check them out or just elf yourself and drop some slick dance moves in an elf costume today. Happy holidays!

Blog Comic Relief with Being Five

Every so often it is good to get your fix of comic relief. I previously mentioned a number of web 2.0 and blogospheric comedic outlets but wanted to also point out Being Five, a comic blog that I recently crossed paths with.

Being Five is a comic strip by George Sfarnas about a kid who blogs using voice recognition software. If the blogging premise doesn't make you sort of chuckle than I would advise you to take some extra B vitamins and get some sunshine cause comics are not going to help. I would give Being Five a whirl when you need a laugh.