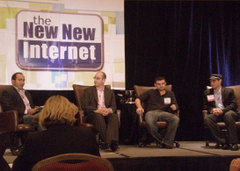 How can you engage your client community via blogs and social media? Last Thursday, I spoke on a panel at The New New Internet Conference to discuss this very question. The panel consisted of Gary Vaynerchuk video blogger at Wine Library TV and Director of Operations at Wine Library, Geoff Livingston blogger at The BuzzBin and author of Now Is Gone

and myself blogger at Somewhat Frank, co-founder of  TECH cocktail a community-building event startup and product manager of myAOL. If you want to find out about social media you best watch the video and learn about blogging, engaging social media and hustle 2.0!

Strumming a six-string guitar can be a very relaxing exercise but it is not something you can learn to do well overnight. It takes time to practice and perfect your skills. Read/Write Web recently wrote an article listing a number of web 2.0 sites and services for musicians. I recently found one that was not mentioned but is worth mentioning called JustinGuitar.com (no this is not Justin.tv).

UStream.tv To Broadcast Yourself Live

While online video upload sites have become extremely popular in the web 2.0 movement, it appears that live streaming video seems to be catching on fast. UStream.tv offers users the ability to create their own live web channel with live chat functionality.  Streaming video is by no means a new concept but the UStream.tv platform does make it easy for anyone with a web camera to become a real-life Truman Show like Justin.tv.

When I asked UStream.tv CEO Chris Yeh about their product he had this to offer:

“Our story is simple. We're bringing live internet video to everyone.  By removing the barriers to broadcasting, we allow the creativity of our users to flourish.  While many experiments will fail, UStream.tv is the test tube that will help build the future of media.”

Over the past week I have experienced the trend first hand as several people I encountered were using UStream.tv to bring streaming reality broadcasts to the web. At the Web 2.0 Expo I was interviewed by Jeremiah Oywang live via UStream, I also ran into Justin.tv at a couple of different events and Sarah Meyers, Lindsay Docherty and Brian Solis even got into the Justin.tv act. Blog veterans Robert Scoble and Chris Pirrillo are also getting into the act and leveraging UStream.tv to produce live broadcasts.

In attempting to watch UStream.tv I have experienced some poor video quality issues but I figure they will subside with time. I think that we are only at the beginning of what streaming web tv has to offer and UStream.tv is a vaulable part of the evolution process. Check out the end of my chat with Jeremiah Oywang in the hallway of the Web 2.0 Expo below to see the video quality I was referring to - it is a little choppy but still could be effective.

Are You Watching Justin.tv?

Do you remember the movies EDtv and the Truman Show? Justin.tv launched just seven days ago to mimic these past reality-based movies by broadcasting Justin Kan on the web 24 hours a day 7 days a week. Justin Kan is formerly of the Ajax calendar startup, Kiko, which was funded by Y Combinator before it was eventually sold on eBay for $258,100. Justin.tv is also an Y Combinator backed venture with the long term goal:

"...to create an affordable live mobile video platform they can use to recruit other live bloggers."


The site streams Justin live, offers live chat and features some of its most popular archived content. It is no surprise, Justin.tv has been creating quite the buzz thus far as it taps into the masses general love for people watching. Unfortunately, it hasn't been all fun and games for Justin and his crew as their North Beach apartment has been subject of number of pranks.

Check out this interview with Justin below - are you watching Justin.tv?