iTunes has been offering personalized recommendations within the iTunes application for quite sometime and I have found them to be very accurate and helpful. I have often discovered new songs that I like within the recommendations and downloading them quickly for instant gratification. iTunes has started to role out syndication of personalized music data as My iTunes Widgets, making it easy to share your music interests.

One Llama For 'Fun' Music Discovery

One Llama, a product of six employee Champaign, Illinois-based startup One Llama Media, leverages audio analysis, search and discovery systems to offer a place for music lovers to discover, listen, share and buy new music. Though in the music discovery category, One Llama differs from Last.fm, Pandora and MyStrands by focusing more on search result technology rather than community aspects of music discovery.

One Llama's users interface design is fun and light. Users can search for new music by song or artist and search results are returned in a flashy cluster experience (shown in the screen-shot below) that reminds me of Visual Thesaurus or Quintura.

Users can create playlists on their own or One Llama will create a playlist with recommended songs that are similar to a song or songs you have identified. One Llama created a quick list of recommended songs based off of one song I liked. I was then given the option to share, save or buy these tracks or the playlist. I have shared the list below as an embeddable widget but you can also share it directly to Facebook.

If you like a song you can purchase is on iTunes or Amazon. One Llama also offers an iTunes plug-in which links the web to your desktop music making it even easier to find and purchase the songs you just discovered on One Llama.

In talking with Director of Product Development, Amit Sudharshan, a recent graduate of University of Illinois at Champaign-Urbana, he explained that:


"One Llama believes finding music should be a 'fun' experience that people should be able to discover, enjoy and share."

As a music lover myself, I would have to agree. Currently, One Llama uses collaborative filtering to offer up song and playlist recommendations but Amit mentioned that audio signal extraction technology is coming very soon. This will enable One Llama to offer music search technology which uses collaborative filtering to recommend songs that people usually play together as well as signal extraction technology to recommend songs that sound alike. One Llama recently partnered with EMI and APM to power their search and find songs that "sound like" other songs within the APM library.

Sticking with it's 'fun' mission, One Llama shows its lighter side by allowing users the ability to personalize their llama avatar. My llama avatar is shown to the right.

Bottom-line: One Llama offers an innovative music search and discovery technology that is fun and easy to use. I had fun using One Llama and I think you will too. 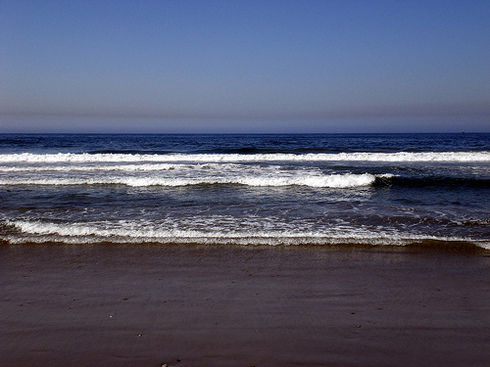 Photo of the Week: While in Santa Monica, California this week for Twiistup I decided to get up early on Wednesday to go down to the beach and snap this shot.

Facebook to Launch Classifieds Service
Social network Facebook is set to launch a classified service to its users on Friday, according to the New York Times. The service will launch under the name 'Facebook Marketplace.' Makes sense, they are fishing where the fish are.

Are Search Engine Rankings are Dead?
With the advent of personalization and impending changes with the interface of search results, the notion of ranking seems to be on it’s way out. Lee Odden takes a closer look.

You're a Nobody Unless Your Name Googles Well
In the age of Google, being special increasingly requires standing out from the crowd online. Many people aspire for themselves -- or their offspring -- to command prominent placement in the top few links on search engines or social networking searches.

iGoogle Community Modules
Want to put a little piece of yourself on your friends' and family's homepages? The iGoogle team seems to launch little updates every other week but this one caught my eye. it’s a new category called “my community." With cookie-cutter templates you can create your own modules. Creating and sharing these Google Gadgets is as easy as filling out a simple form.

Last.fm Launches Video - Aims To Be The MTV Of Web 2.0 Age
Online radio station Last.fm is adding a video section to its site this week, enabling users to create their own personalized video channels - similar to how users can already create radio stations based on their music tastes.

RSS Feeds for Tags at Amazon.com
The new functionality has been soft-launched and isn’t currently available on all Amazon pages. Support will become available across the board in the coming weeks. Woohoo!

MySpace/Photobucket: User Overlap Is Nearly 100%
NewsCorp plans to pay half as much for Photobucket as they did for MySpace. Photobucket is going for $300 million, and MySpace was acquired for $580 million, back in 2005. Interesting analysis by Mr. Arrington.

What Happened at Digg?
The firestorm that erupted at Digg earlier this week over a censored post has led to a lot of discussion about the nature of censorship in a world where everyone is a publisher. Some are calling it the "The Great Digg Revolt,"  as it illustrates just how much power the web 2.0 movement has given to its users.

Gmail Users are Younger & Richer?
The latest stats show that Gmail users skew younger and richer than other mail products. I guess I am old and poor cause I don't use Gmail.

Five Twitter Tools We Love
Getting sick of Twitter? Maybe these five add-ons may help convince you to the service for a bit longer.

What is your favorite web tech conference in 2007 so far?
Don't forget to vote for a conference you enjoyed the most so far this year!