The Best of CES: My Favorite Shiny Objects 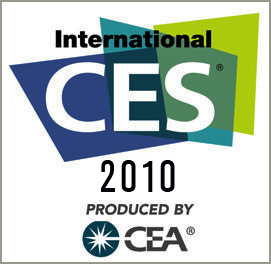 I just got back from the Consumer Electronic Show in Las Vegas, thanks to Intel and my participation in the Intel Insider program. It was a lot of fun and I saw lots of shiny objects and gadgets. I wrote a piece for TECH cocktail sharing the Best 13 at CES 2010. Of the list, I'd take every item on the list but if I had to pick the one I would probably purchase first, I would probably look into the new Sprint Overdrive Mobile 3G/4G hotspot made by Sierra Wireless. It leverages the Clearwire WiMax network to take advantage of the 4G unlimited speeds.I was at the Baltimore WiMax launch so I am looking forward to getting one of these devices to take advantage of it.

If I had to find the coolest gadget, it was probably the Alioscopy 3DTV at the Intel booth as it did not require 3D glasses to view in 3D. Though it has some restrictions on the content that can be turned into 3D it was a pretty impressive device. It was by far the most interesting 3D TV I saw because it was the only TV that was in 3D with the use of glasses. Check out this video of the 3DTV at the Intel booth.

Continue reading "The Best of CES: My Favorite Shiny Objects" » 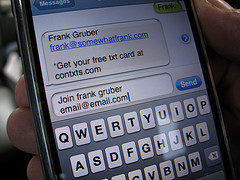 I was in San Francisco this past week and I met up with Danny Newman of PocketFuzz and Contxts who was also in town for the week. We headed over to visit the Digg office and on our way back decided to do an impromptu "how to" video about Contxts.com, a text message business card solution.

Check out episode 46 on SOMEWHAT FRANK which was actually shot in the back of a car driving in San Francisco.

I have previously questioned if technology will replace business cards as well as explored some printers taking fresh approaches to keep business cards alive. Recently a couple of text or sms message business card providers like  TextMarks and a few others have emerged to help you ping your information to anyone by text message. Just this week a new product emerged called MyDropCard which offers users the ability to send a nicely formatted email of your contact information all with a simple text message as the initiator. It just takes about 30 seconds to create an account online and then you can start sending dropcards to new contacts you meet. It also keeps track of all your contacts for you too.

MyDropCard was a product of the most recent incubator DreamIt Ventures which had its investor and demo day this week in Philadelphia. Check out video episode 43 on SOMEWHAT FRANK as I explain MyDropCard.

Filling a vehicle with gas might be the current problem for many, but finding a place to park the car has been an issue for a lot longer. Several companies have fired up to help frustrated drivers park their vehicles.  Two previous posts addressed the parking problem with Parkwhiz and Parking Hunter - and I am sure there are a few more similar products.

The new kid in the parking reservation camp is BestParking.com, a free online search engine and rate calculator for Manhattan’s 1,030 parking facilities with a free mobile version available.  Founded in 2006 by 20-year old college student Benjamin Sann, BestParking.com offers a very simple design. Interestingly, the site was inspired by “an episode of Seinfeld in which George refuses to pay for a parking space.”  The company consists of 3 full-time and 6 part-time employees.

The Apple iPhone application was opened last week and AOL launched the AOL Radio application. The application is free and worth giving a try and a listen. It allows users to connect to both XM and local radio stations. It even is able to connect users with popular stations in larger markets. For example, I might want to listen to a popular Chicago station sports talk radio station like AM 670 the Score while in Washington, DC and AOL makes this possible.

Mobile social networks have come a long way since Google acquired Dodgeball back in 2005 as both mobile devices and online product offerings have improved. Twitter and other mobile enabled lifestreaming and communication products have taken off as users have grown more accustom to text messaging. That said, I finally got around to give, the Colorado-based startup Brightkite a try and was impressed by it.

With the popularity of text messaging and the rise of Twitter via mobile there is a growing trend for find me/follow me mobile applications. FindWhere, a Sterling, Virginia based company, has just launched an application called Livecontacts to help you find and keep track of your buddies. Users can now share their location and track their friends’ locations for free. Livecontacts is taking the same approach that craigslist took to democratize the online classified advertising space by offering users what is traditionally a paid geographic data service for free.

There are so many things to remember these days that it can be somewhat difficult to keep track of everything. While notes in a moleskin, sticky notes, emails to yourself and photos of things you want to remember might be a few ways to remember things - all these methods seem to scatter reminders all over the place. Evernote, a Sunnyvale, California based startup, looks to offer a place to send, store and retrieve all of the things you need to remember. As a member of the frequent flyer club, I have used TripIt and previously reviewed when it first launched. Now TripIt has made traveling easier by adding some additional mobile support for users on the go with the TripIt Mobile release. With TripIt Mobile users can access what they need to know from their mobile phones including flight changes, and in my case cancellations, hotel addresses and phone numbers, and auto rental info. By adding additional integration components for your TripIt account, even restaurant reservations can be accessed.

Making TripIts applications available on mobile devices makes a lot of sense since when you are traveling you are most likely cannot as easily get on your computer.  TripIt offers applications to enable staying in touch with others in your social network, allowing you to schedule appointments if in the same area or at the same event. In checking out the mobile experience I snapped the photo shown here can be visited on your mobile device at: m.tripit.com.

If you are on the go or in lots of meetings (like I find myself) you might want to get your voice mail converted to text message or email. YouMail, an Aliso Viejo, California based startup has just added this feature to its private beta which already is a feature rich mobile voice mail solution which offers personalized voice mails based on caller ID, smart greetings and the ability to manage voice mails over the Web.

The adoption of Twitter, which I covered previously a number of times, appears to be acceleratingly since March 6th as I have seen my followers double in that three week period. My friend Gary Vaynerchuk recently started to do a daily "thoughts on life" video podcast and gave his thoughts on Twitter vs. Facebook...kinda. So in response to his video I wanted to make a quick SOMEWHAT FRANK TV episode 18 with my thoughts on Twitter (mainly) as well as a few comments about Facebook. I use them both and they are complementary products.

Getting to your personal while away has now gotten a lot easier thanks to the San Diego based startup ajax 13 creators of ajaxWindows. ajaxWindows enables users to access their computer desktop just as if they were on it via a web browser from anywhere and event on a mobile device. Simply create an account and ajaxWindows syncs with your desktop and creates a duplicate online version. You can then access it from anywhere while on the go.