Is Your Site Mobile Ready?

Is your site mobile ready? .mobi has launched, ready .mobi, a mobile-readiness test to help site owners. You simply put in your URL and using industry best practices & standards you find out if the site is mobile ready.  Unfortunately, Somewhat Frank is not currently fully mobile ready. You can visit the Somewhat Frank Mobile Version but it currently is only detecting and redirecting users visiting the site with Windows CE over to the mobile version.

Eric Olson previously wrote a piece explaining how to setup a mobile version of your site leveraging the FeedBurner BuzzBoost feature and simple server level http redirects. This method works wonderfully if you have server level access. Somewhat Frank is on Typepad, the SixApart hosted blog platform, and does not enable the same server level access as host it yourself solutions. Typepad does not  currently offer an out of the box mobile browser detection solution. I contacted TypePad support about it and JavaScript was mentioned as an option but no clear details were given so I found some JavaScript to handle Windows CE users. If anyone knows of other mobile redirect solutions that could be implemented on hosted blog platforms like Typepad please let me know.

Can You Patent Emoticons? :(

Apparently you can patent character groupings known as emoticons since I just read Cingular was allowed to patent mobile emoticons. At first glance I thought this sounded absurd. How can a mobile company or anyone for that matter own characters grouped together to form an alternate meaning like the smiley face? :)

In reading further I determined it was not just the character groupings that made up the patent but a system used to display faces via mobile devices. Feew, I thought I was going to have to quickly patent the question mark when transmitted via a mobile device. Thankfully, I will not! ;)

*Emoticons image thanks to JaguarWoman.com

Headed to Florida For New Years 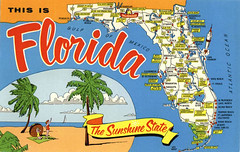 I am headed to the airport right now for a New Years weekend in the sunshine state of Florida. I am looking forward to seeing my girlfriend, getting some sunshine and relaxing while the holiday season draws to a conclusion. I will do a little mobile blogging from Florida if I feel so inclined.

Two-thousand five, was a year of big expectations for me and for the most part it lived up to its billing. I felt it was in some ways a year I could do no wrong. Maybe it is because I am the fifth Frank and the five at the end of 2005 was going to align and somehow bring great fortune. Call it arrogance or maybe it was just pure ignorance for other years. Nonetheless, I used the following catch phrase far too many times then I would like to repeat at this time:

However here is a very quick month-by-month overview of some of the happenings in my life and the Somewhat Frank blog.

With a year like 2005, what's in store for 2006? In 2006 on Somewhat Frank, I plan to stay more focused on business and technology and how it affects life. 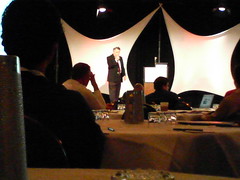 Doc Searl the Syndicate SF Conference. Doc spoke of how Dave Winer "badgered" him into blogging in the Fall of 1999. Doc noticed that fall when blogging just started to take of as the beginning of the "split of the web" from the use of the static web to the dynamic or "live" web. This is an entirely new environment that has brought syndication to the forefront due to its ease. With syndication anyone can produce content. However, Doc mentioned:

"Syndication is so new that we don't even know all the rules yet." 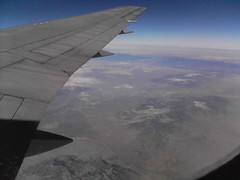 I am well on my way to San Francisco for the Syndicate conference aboard a Boeing 767 United Airlines aircraft. I took this photo while watching the movie Cinderella Man somewhere over Nevada.

Chicago Gets Dumped On With Snow 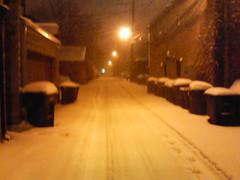 The photo to the left is what I dealt with on the way home from work today. So far seven inches of snow have fallen and it is still coming down. I would have to say this is one of the features that make Chicago a unique city. It gets all four seasons in full.  I think it is gorgeous outside to look at but the snow makes it messy to get around. 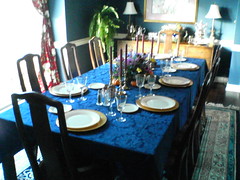 I headed out of Chicago to the country late yesterday evening for the Thanksgiving holiday today. The table is getting set and the turkey is in the oven as we prepare to give thanks, feast and watch football this afternoon.

UPDATE: I just snapped a photo of this eight point whitetail buck in the backyard. He appeared to be somewhat interested in meeting the little doe in the background. 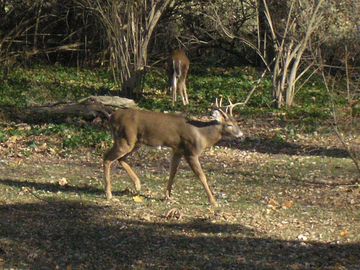 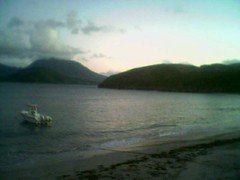 I just got this email from my sister who is in the Caribbean on the island of St. Kitts where she is attending a wedding. Bless her heart.

I love to hear from my sister but honestly I saw the picture and got instant island envy. Though the photo above is a little dark it is the last thing I wanted to see as I wrapped up another work week where going outside in Chicago was a struggle due in part to very cold temperatures and even snow flurries. Grumble. Grumble. 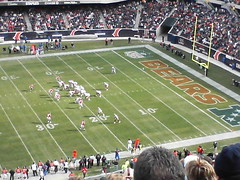 I am bundled up with my girlfriend at Soldier Field watching football on a windy day in Chicago,  as the Chicago Bears take on the San Francisco 49ers. The 49ers are far removed from the dominate days of Montana, Young and Rice. Let's hope fellow Purdue alum Kyle Orton and the solid Bears defense can lead the team to victory in Chicago today (November 13, 2005).  GO BEARS!

GAME UPDATE: The Bears win 17 to 9 but lose rookie Texas running back Cedric Benson to a gruesome looking knee injury. We saw an usual record setting play as a missed 52 yard field goal by the 49ers was knocked out of the air by the dusty winds and returned 108 yards from the end zone by the Bears Nathan Vasher. This was an amazing play and is the longest return in NFL history.

Goodbye Sweet Georgia and Thank You 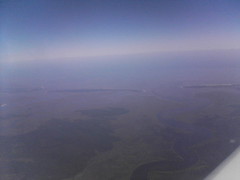 Over Georgia originally uploaded via camera-phone by Somewhat Frank.

I just flew home from Georgia and took this photo out the window of the airplane. It was a wonderful weekend away from Chicago. I spent time with some extraordinary people and really enjoyed myself. The weekend seemed to pass so fast it is quite obvious I was having fun.

A special thanks is in order to the hosts and everyone involved the trip for letting me share the moment. I would also like to send happy birthday wishes to Poppop who turned 90 years young this weekend entertained us with his music and still shot his age in golf on his birthday... simply unbelievable! 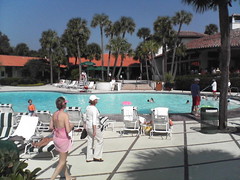 I made it to Sea Island, Georgia's Sea Island Resorts safely. The weather has been beautiful. I only have checked email once to receive feedback on a Tribune project I am currently managing. So I have definitely have gotten to relax. Though I have read the Wall Street Journal and NY Times everyday by the pool, where I read about the recent sale of iFilm to MTV and kept up with my sports teams via ESPN while lounging at the gorgeous beach club (shown above). I also caught some rays, swam some laps and got a wonderful massage at the spa from Melissa. She has strong hands! I also got to explain Splog Reporter and the effort to rid the blogosphere of spam blogs in a few conversations.

Unfortunately, I fly back later today. I should be just in time to eat a nice dinner at my favorite Italian restaurant and catch the baseball playoffs and to get ready for the work grind tomorrow.

Georgia On My Mind

In less than three hours, I will be departing for Sea Island, Georgia for a weekend away from the big city. It is a much needed fall break after battling mono in September. I hope to catch some rays on the beach and get some much needed rest and relaxation. However, I also plan on mobile blogging some of accounts of my weekend trip via my recently acquired LG VX9800 cellular phone. I love this thing! It is equipped with a 1.3 mega-pixel camera so I can post images from the beach if I so desire. Not to mention it gets VCasts video clips, text and picture messaging, Internet web browsing and pretty much can do anything a Blackberry can do in regards to email.

I am looking forward to the sunshine and sea breeze. Today, I have got Georgia on my mind! 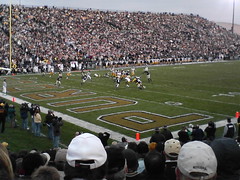 As a Purdue University alum I took a road trip down to watch Purdue's football team take on Iowa. While the trip was enjoyable the actual game was painful to watch as Purdue dropped their third straight game. It is quite obvious to me that it is going to be a long season for the Boilermakers. However, the Big Ten conference is filled with parody. It was most likely a historic day with Ohio State, Michigan, Wisconsin and Purdue all losing on the same Saturday. When was the last time that happened? My other Alma mater, Northwestern beat Wisconsin which completed the list of upsets. This leaves Penn State as the clear favorite in the Big Ten but Michigan State is also looking tough. You have got to love college football, especially in the Big Ten.

Posted at 10:50 AM in Mobile Blogging, Other Aspects Of Life, Somewhat Frank, Sports | Permalink | Comments (0) | TrackBack (0) 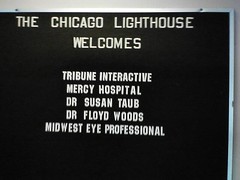 I recently visited the Chicago Light House with Tribune Interactive as part of the United Way Leadership breakfast. The Chicago Lighthouse helps the visually impaired with support, career help and schooling. They also have a 30 employee clock making business that is run by the blind. It was amazing to see the assembly line. It was a very eye opening visit and made me feel good in supporting the United Way.

Posted at 10:21 AM in Charity, Health, Health and wellness, Mobile Blogging, Other Aspects Of Life, Somewhat Frank | Permalink | Comments (0) | TrackBack (0)