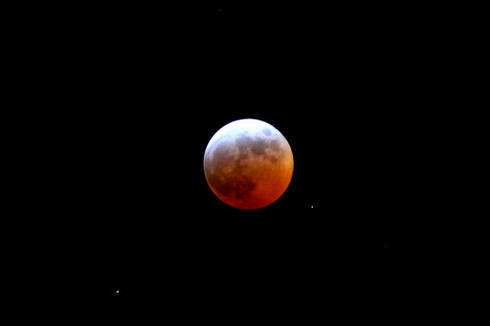 Photo of the Week: It was a rather peculiar week so I went searching for answers in photographs and found this photo titled very strange moon tonight by Ordinary Guy. It captures the lunar eclipse that occurred on March 3, 2007.

"Because of this information explosion, we no longer read - we skim."

The rapid explosion in content has caused a scarcity in attention. Do you read or skim?

Universality of the web widget
Niall Kennedy gets down to the nitty-gitty of explaining some of the differences between widget deployment endpoints from the publisher's point of view, explaining just a few ways a widget must adjust its dialect and structure to adapt and optimize in different widget environments.

Digg Should Sue Wired
Mike Arrington thinks Digg has grounds to sue Wired and explains why in this article. He points to the fact that Wired Magazine’s parent company, Condé Nast, owns Digg competitor Reddit and how they are actively engaged in using Wired to undermine Digg.

Quintura Relaunches With New Interface
Quintura, a Moscow-based company I have highlighted previously has relaunched with a new interface.

Adobe Photoshop Online: It’s Real
Adobe will move Photoshop online as part of a larger move to introduce ad-supported online services to complement its existing products and broaden the company reach into the consumer market.

TouchGraph - Discover the Relationships Contained in Popular Information Sources
Orli Yakuel showcases an interesting search tool that produces a cluster map based off the links to a particular URL. Just remember to get the Java 1.5 toolkit before attempting to run it on your machine. The TouchGraph for Somewhat Frank can be found here.

Google Maps Tailgates Yahoo, Microsoft With Real-Time Traffic Info
Google Maps has caught up with Yahoo and Microsoft in adding live traffic reporting for the United States to their online mapping service.

Data Shows English Blogosphere Has Peaked
Has the English blogosphere peaked in its growth? A new University of Maryland County report seems to think so. What do you think?

Blog Archive SMS-based Starbucks locator, a double shot
Coffee drinkers can now rejoice in the fact you can now send a text message to find out the closest Starbucks. I prefer Dunkin Donuts but either way, I think it is pretty sweet.

Flickr Turns 3
That's right, Flickr, the online photo sharing community owned by Yahoo, has turned three years old and had a big bash to celebrate. Photos can be found here.

Somewhat FeedBurner
Apparently, I have started to receive snail mail at the FeedBurner HQ in Chicago. I guess people think I work for FeedBurner instead of AOL. Either way, I cannot argue with the idea of dual incomes. :)

Search Engine Land recently had this to say about the launch of Quintura for Kids:

"I think the concept of visual search is one that will appeal to children, and they may well find this an interesting, enjoyable and above all different way to search."

I definitely agree, as Quintura for Kids is a lot friendlier visually than other search engines.  Quintura for Kids should be a hit with children looking to search the web but we probably should leave that decision up to the kids.

Quintura Gets Funded By Ex-Skype Backer 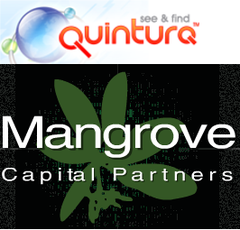 Quintura, a Russian hot search startup, has reported they have received funding from Mangrove Capital Partners of Luxembourg. Interestingly, Mangrove Capital Partners was also an early investor in Skype. I have highlighted Quintura a few times on Somewhat Frank but most recently due to the launch of Quintura as a web-based visual search engine application. The deal is the first Western VC investment made in an Internet company from Russia.

What does Quintura plan to do with the money? Yakov Sadchikov, co-founder and CEO of Quintura had this to say:

"We plan using the venture capital to take the Web by storm and reach millions of web users globally when launching the Quintura visual find engines for various user communities. We are also starting an affiliate program for most popular web-sites and blogs such as Digg, Netscape, and others where they can easily make their current tag clouds very interactive."

I cannot wait to see Quintura's unique interactive word cloud on these other social media communities. It should be rather intriguing. For other blogosphere perspectives check out Read/Write Web, Mashable and Go2Web2.

Quintura has taken its visual search engine to the web. Previously, a download-able search software application, Quintura has recently launched a slick looking web version that is powered by the Yahoo search. The search engine returns either web and image results in a, Quintura Cloud, a visual relationship cloud (similar to a tag cloud), that reminds me of Visual Thesaurus.

"We strived to build something that made it as easy as possible for the user to find exactly what they are looking for as quickly as possible. We also wanted to make the user experience very visual and more enjoyable, so we built in visual navigation technologiesthat are more appealing to users."

Quintura is focused on making its search experience enjoyable and easily shared by offering users a "share" option to the right of the Quintura Cloud. You might notice Quintura also enables searchers to "save" a search which definitely has utility if you frequently run the same searches. 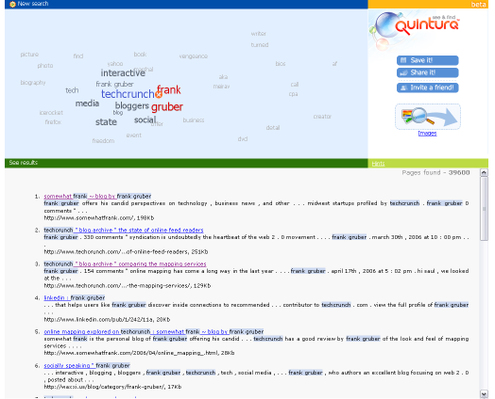 If you click the screen-shot above you will see a larger view. For a another perspective check out Go2web2.