TechCrunch, the popular technology blog created by Mike Arrington which I have had the pleasure of occasionally contributing to, allowed FeedBurner, the feed management powerhouse, to dissect its feed metrics publicly with this recent article by Traci Hailpern.

I found the entire article extremely interesting as it gives in-depth answers to a number of feed related questions and is the first article I have seen of this nature. It most likely will be a hit as it will make an excellent bookmarked reference for months to come.

The following are points worth noting:

Ironically, September 6, 2006 was also the most active day (to date) for Somewhat Frank due to this article.

Just a few days ago I reported that Rojo was missing its mojo and now it appears not only its mojo but all of Rojo has been sold to Six Apart. Six Apart has acquired Rojo Networks, which includes Rojo one of my favorite online feed readers, as I previously conveyed and NooZ.com, a community edited news site. The Six Apart press release can be found here.

The move puts Six Apart in a pretty good position with blog platform products for the three main blog niches (personal, professional and social) plus a solid online  feed reader and blog search engine in Rojo.

The Rojo blog has reported the following plans:

"Six Apart plans to spin the Rojo service out – so we will continue to innovate and improve the service. As proof of that, stay tuned in September for a very significant release of Rojo. We are migrating Rojo to a new architecture – one that we built when we launched NooZ.com – which will greatly enhance the speed and usability of the service. Details will follow soon."

Is Six Apart fueling Rojo as they prepare to flip it?Or are they branching out the product line to position themselves to be acquired? It's hard to say but it will be interesting to see what happens.

Did Rojo Lose Its Mojo!?!

I was just visiting Rojo, the online feed reader, and much to my dismay I noticed that the mojo button which I so adored is gone. The mojo button usually appears to the right of each feed item and allows you to give items that you particular enjoy a positive rating by clicking the mojo button. 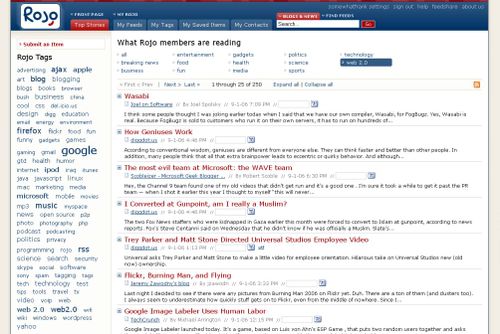 I checked the Rojo blog and it mentions nothing of a change to the mojo functionality. I wonder what happened? I hope Rojo is able to find its mojo and return vibrant as ever real soon!

UPDATE: Rojo has found its mojo! The mojo button has returned this morning (September 2, 2006). 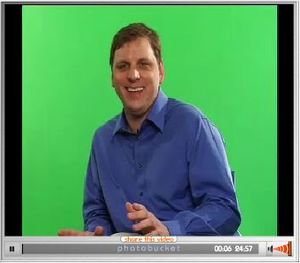 The question "What is Web 2.0?" among other things was pondered recently by Mike Arrington with a number of startup CEOs and executives on a video filmed deep inside the Silicon Valley echo-chamber. Here are some interesting tidbits which were blended into the 24 minute video:

Everyone has their own definition of Web 2.0 - so what does web 2.0 mean to you?

Rojo Gets A Facelift, More Blue

Rojo, the San Francisco-based online feed reader, just launched with a new look which incorporates more blue and easier navigation. I would say they just spruced up the site a bit. Of course the "more blue" could be attributed to watching too much of the movie Old School - and Blue is their boy! I am only speculating. 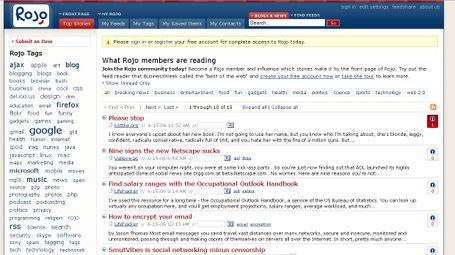 I actually noticed the redesign a few days ago as a Rojo staging server appeared in my metric reports. I emailed Rojo to find out details on the redesign upon discovering the server but unfortunately no one from Rojo replied to my email. Also check out Mashable* for more details.

UPDATE (6/19/06): Rojo CEO, Chris Alden DID get back to me immediately via email but it got flagged as spam and I was unable to get through my sea of 14,000 spam emails to find his. I have since made sure his email address is flagged as "not spam." I apologize Rojo for not being able to realize it sooner - keep up the good work and excellent customer service!

Rojo, a San Francisco-based online feed reader company which I previously reviewed favorably on TechCrunch, has quietly launched a blog search engine feature based off the large abundance of feeds the online feed reader is currently tracking. The search engine feature also takes into account Rojo's feed reader rating system call "Mojo." Rojo has also recently expanded its "Mojo" feature to be used on any web page on the web via a bookmarklet. The Rojo blog explains it by saying:

"Think of it as feed reading meets smart bookmarking: tag pages, share them with friends - and find them again easily."

This expands Rojo's reach to not only the blogosphere but also to the web and positions Rojo into not only a feed reader but also a community or social search which could rival that of Eurekster's Swicki product among others.

I noticed the search text box appeared in the top right corner of the Rojo feed reader a few weeks ago but for some reason did not realize it was a new feature since I believe it replaced another text box which allowed you to add a new feed.

I was made clear it was a new feature when I received an email newsletter from Rojo which point out how to add Rojo blog search to your Google Toolbar search toolbar.

According to a recent article by Mike Arrington on TechCrunch highlighting the launch of the Rojo blog search engine:

"This is just a first pass at search. Chris (from Rojo) tells me they will be relaunching with a new interface in a couple of weeks."

However, Rojo looks to be positioning itself for more than just blog search. Rojo appears to be targeting community search and we can expect Rojo to rollout even more search initiatives soon. I wrote a guest post that just was published on TechCrunch, the weblog tracking Web 2.0, titled The State of Online Feed Readers. I analyzed the leading web-based feed readers and a few up and coming readers and compared them.

Thank you Mike Arrington for the opportunity. It was my pleasure to write the post. I hope you enjoy it. If you like the review please Digg it here.

NOTE: TechCrunch is not being renamed SomewhatFrankCrunch as I might have joked about previously.