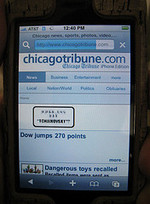 End of the Web's Free Ride?

End of the web's free ride? Doubtful. As a former Tribune Co. employee it was surprising to see the Washington Post article published today (April 7, 2007) saying that, soon-to-be Tribune Co. owner and real estate billionaire, Samuel Zell was set on trying to make news aggregators pay for newspaper.com content. Though Sam is quick to admit he is new to the newspaper industry, he was quoted saying:

"If all of the newspapers in America did not allow Google to steal their content, how profitable would Google be? Not very."

In an age of an open, attention economy of syndication and new media, Sam Zell's direction seems so 5 years ago. Don't Google and other news aggregators provide a service to these news sources by sending them relevant traffic so that they can serve up their own ads and generate revenue? Yes. Mathew Ingram offers some additional perspective on this topic by saying:

Mathew is right on the money. Though Google has been reported to be paying for some of its Google News content, publishers have the power to restrict the amount of content that is syndicated and most newspapers do this by only syndicating a one sentence news brief thus sending most traffic back to the source site. While I do not know the entire context around Sam Zell's quote to make aggregators pay, I find it rather disturbing as it could land Tribune in some trouble if this philosophy is  applied, especially in a time when micro-publishers and citizen journalists with less overhead thus higher profit margin are out there covering the news.

It will be intriguing to watch what Tribune does with its content, I hope they decide to capitalize on the ad revenues from it rather than the revenue generated from aggregator rights. No disrespect to Sam Zell, he is a billionaire and I am not, but if I could give one bit of advice I would suggest he investigate the recent changes in the media landscape in regard to paid vs. free content strategies before taking the helm at Tribune. I would point to Washington Post Newsweek Interactive a competitor that "gets it" and could serve as a great role model for Tribune. I guess my point is, if Tribune is going to turn the clock back and dive into the old "people should pay for our online content" mindset then Tribune is totally f*cked - I would hate to see that happen.